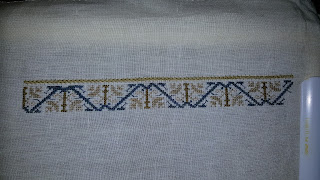 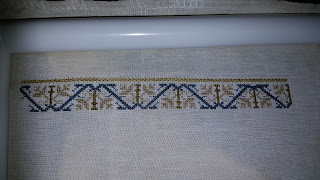 Last night I started on the leaves in band 2 of Loara.  These may take a bit.

Sorry about the dark pictures.  It was late last night when I took them.

Tonight, I hope to add the brown stems (?) and some of the leaves.  I'm still hoping to finish this band by the end of the year.

This weekend, I also bobbined thread for Mourning for Icarus

Yesterday, I picked up the few colors I was missing while we were in town to see Star Wars.  I enjoyed the movie.  Has anybody else seen it?  Opinions?  I think it went back to the more of the feel of the original series.

When I put the kit for Icarus away, I pulled out Evolutionistic which also needs to be bobbined.

I haven't cut fabric for these two yet, but they are moving up the list a bit.

The end of the year creeps closer.

After Daybreak was put away, I pulled out Loara.  She's my last unmet goal this year.

I got this far and realized, that first arch is off and won't have enough room for what's supposed to be stitched under it.  So, I've taken a break this afternoon before I sit down to frog her.

I've dyed fabric for Sea Witch and He Came With the Rain since they're both pretty dark and I don't want a bunch of show through.  I dyed them together so they're pretty similiar but different.

Then I decided I need more bling in my life and went to my Chatelaine stash.  I pulled Hawaii, Midieval Octagon and Beaded Dragofly Tile.  They all now how have fabric and I know what DMC I'm missing and need to pick up on my way home from work one day this week.

Now Im going to fold some laundry and have a chat with a frog.

Thursday, we lost another chicken.  She hadn't been acting herself since we moved them from the summer coop to the winter coop.  Truthfully, I didn't expect her to still be alive when we got back from Thanksgiving.  So now we're down to just two.

On the stitchy side of my life, I'm still working on SS Daybreak and am hoping to get through all the confetti by the end of the weekend.

Then, I'll be back to Loara to see if I can finally get the second band stitched!

Is anyone else looking forward to the new year?  Any new starts planned?  I'm planning to start HAED's Sea Witch

She's almost all kitted up.  All the thread is bobbined.  I just need to cut fabric which will probably see some dye since the art is dark.  Stitching on white is just asking for lots of it showing through.  I may also start a new Chatelaine.  I was looking at a couple of Chatelaine finishes this week and decided I needed more bling in my life.  So maybe Winter Filigree

or maybe I'll go all out and just start the Polar Mandala?

Choices!  At least I have something to think about while I finish page 1 of Daybreak.

It doesn't feel like I've accomplished much over the last week, but the pictures say I haven't done half bad.  Last Tuesday, I was almost done with the sky and hoping for another color.  There are some greens and grays in my trees so far but there are still lots of blues.  Go figure.

and here is where I am currently.

I'm really hoping to finish this page this week so I can go back to Loara and meet my goals with her for 2015.

Can't see the trees for the sky

I've finally gotten far enough down the page that I can see where the trees start.  I'm hoping to finish the blues tonight and start on another color

Last week for Thanksgiving, we went to visit my in-laws in Oklahoma.  While I did take several different projects to tempt my stitchy bug, only Glory and Honor received any attention.  That may be why my stitchy bug has been AWOL since I took it off the q-snaps.  Don't know.  I did get all the stitching done on it Saturday night and start beading.  Haven't made a lot of progress beading yet.  I forgot how spoiled I've gotten with the Delicas in Chatelaines.  I really dislike Mill Hill beads.  Anyway, here's Glory and Honor before I started adding beads.

And the frog came to visit

For the last week or so, I've been working on Glory and Honor.  And making pretty good progress.  But last night I realized, it's a month and a half until the end of the year.  If I want to hit all my goals this year, I need to actually stitch on them.  So, Glory and Honor was pulled off the qsnaps and put up.  At least until Thanksgiving when I need a project for the car.

Here's where I am now.

For some reason, I've had issues counting so there are at least three mistakes but that's what makes it unique, right?

After Glory and Honor was put away, I picked Loara back up and started working on the bits that weren't in the direct line of stitching.  That's when I realized, crap!  I goofed!

The blue on the right side should have lined up with the gold above it.  Obviously, it didn't.  This is what I get for only following part of the chart.  The chart for this band is divided into two parts.  The top part shows the entire band, the bottom part shows what stitches are supposed to be used and the color.  The probem is, it only shows the first rise and fall of the blue and what fills the inside.  I followed that part for all the rest of the band too.  Which got me this:

I'm going to keep working on this for now.  Hopefully, once I get going again, it will go quicker and I can start filling in the open spaces.
Posted by Sarah at 8:48 AM 4 comments:

I don't know why but this week, I just haven't been able to settle down with just one project.

and I've started Glory and Honor again, this time for me.  I dyed fabric for my sitter's and mine at the same time in 2010 and mine has been waiting for me since.  Here's the finished version.  I framed it and it went to my sitter and has hung on her wall since.

and where mine is

Last night when I got home and went to check on my chickens, I found one of them dead.  I knew she wasn't feeling herself for the last week or so because she would be in the coop roosting when I would check on them but would come out when I opened it up to check on her.  We buried her under the trees.  It makes me sad to lose one.  They're so full of personality.  We'll miss you Blondie!

I'm slowly making progress on Loara.  I'm a little further than this picture from Saturday.  There's still a long way to go on this band but I am starting to get more comfortable with the stitches.

Two of the HAED groups on Facebook have a challenge running.  One is the regular HAED group and the other is the Supersize Group.  The challenge is stitching 100 stitches a week until November 28.  I figure I can manage that.  Saturday, Earth Song saw a little progress.  I'm pretty sure I added more than 100 stitches of black on that wolf.

And I started SS Daybreak.  So far that's just DMC 809 but a start is still a start and I got way more than 100 stitches done since I wanted to finish my length of thread.

Sunday, I also got all my skeins bobbined for HAED's Sea Witch which will probably end up being my New Year's start.

Thank you for all the lovely comments and welcome to my new followers!

The Master has remained out and is making some pretty good progress.

Loara Standish has come upstairs.  Band 2 is my last goal this year.  I took her off the scroll bars she's been on and am trying my q-snaps instead.  If I can keep my cats from walking across her or laying on top of her we'll be good.

It took me a good hour last night to figure out if the bronze vertical stitches were right and to figure out how to do the blue.  Once I got started, the blue wasn't too bad but the little bit I managed last night still took a good 20 minutes.

For now, he's still out and I made a little more progress than this.

Lust, page 20 and The Master

After I put her away, I pulled out the Master since Yoda hasn't seen any love since 9/16/14 when I left him looking like this

Here's the progress made through this afternoon.

I've also been doing some bobbinating.

Daybreak is all kitted up and ready for a new start and I've brought HAED's Sea Witch and Unconventional XS's He Came With the Rain kits upstairs so they can be bobbinated too.

Sprinkle in some laundry and my weekend has been quietly uneventful.  Just like I like them!
Posted by Sarah at 6:04 PM 6 comments:

Labels: He Came With the Rain, Lust, Sea Witch, The Master

I was really hoping to get further on page 20 this week but life got in the way.

My oldest son is playing 7th grade football this year.  They almost didn't have a team but managed to get enough interest from players friends that they have a very small team.  Unfortunately, several of the players haven't played football before so it's been an interesting season.  My son has had a blast.  He really likes to tackle and is very good at it.  I tell him it looks like if someone is within reach, he will take them down and it doesn't matter if they're bigger than he is or not.

Today, my in-laws are driving up with a niece to watch him play tomorrow.  So the weekend was full of cleaning and room moving since we needed to get kid stuff out of the now guest room and into the former guest room now kid room.  I also had the "pleasure" of cleaning the main bathroom.  How can boys miss??

Lust did make some progress this week.  I'm hoping my next picture will be of a finished page 20!

The empty space on the left of the farthest stitching on this page is all DMC 154 so it shouldn't be bad.  On the right, the farthest edge of the page is just one more stitch from the right most edge of the stitching and just a few colors.  I've got my fingers crossed!  The Master and Loara want their share of attention this year!

I think it's been a long time since I shared any of my wood projects here.  I just looked and January 2013 was the last one.  I guess you could say that bug has bit hard.

My youngest son has been sleeping in our guest room since it is cooler in the basement.  Since our parents aren't getting younger, my DH and I decided we would move our son downstairs and move the guest room upstairs.  This involved my building a new bed frame since my son had a metal loft bed that I was NOT going to be moving downstairs and I have previously build my oldest son a bed frame.  Have to be equal but different you know.

So about three weeks ago, I started.

Tonight, we'll be moving the rest of his stuff in to make it his room.