Hi all!  Since I finished Summer Knotgarden, I've been stitching away on Dorothy Walpole again.  Last weekend, I finished the bargello band.

When I moved my snaps down the last time, I found a little hole.  Don't know if the fabric had it or it had help from a fur ball, but it was there.  Here's before

I made my attempt to fix it and I don't think it turned out too bad.

Here's a picture with a little more distance.  I don't think it's too noticeable.

I'm hoping to finish this row of pages by the end of the month.  I participate in a Chatelaine SAL then and am pulling Watergarden back out.  Here's where it is right now.

I have a little problem though.  I can't find my original chart, just my working copy and I don't have the directions.  I'm assuming the backstitch here is DMC 310?  Anyone have the chart and can help?

Posted by Sarah at 2:37 PM 4 comments: Links to this post

Summer Knotgarden had the last bicone stitched on this evening.

Now, back to Dorothy!

Posted by Sarah at 7:37 PM 7 comments: Links to this post

Last month, when Summer Knotgarden was put away, I had every intention of finishing early this month so I could get Dorothy that much closer to a finish.   This is a picture from 6/16.

Then, early on June 18, I submitted my application to another employer.  By 4pm, I had a phone call from the CFO of this company requesting to set up an interview.  We set that up for 10:30am on the 20th.  By 9am the next morning, I had another call from that CFO offering me a job.  Holy cow!  I've been looking off and on for over two years!  AND this was for about 6.5% more than I was making.  I asked for the weekend to decide.  Monday, June 24th, I accepted the offer.  Why do I tell you this?  Because my new job is so much different from the old one!  I started on July 8th.  Since my kids were in camp last week and I had to pick them up earlier than 5pm, I did not take a lunch break except to inhale something to eat.  So no stitching. :(  Even though they were at their grandma's the week of the 4th of July, I've made little progress on Summer Knotgarden.  Some of that can be blamed on a couple of books I've read too.

Anyway, progress as of July 5th was slow but there.

My husband is working all weekend so I'm hoping there is lots of time for stitching so I can finish sometime in the next week.  The boys are going to a friend's house during the day so I can get to work earlier.  I'm thinking I will eat while I'm working and stitch for a half hour or so and still be able to leave by 4:30 every day.  The best of both worlds I hope

Welcome to my new followers!

I had Dorothy out again this week and almost managed to finish the bargello band.  I wasn't sure about the colors but they really work for me IRL.

I post goals on one of the BBs I belong to.  I thought maybe posting my goals here would give me a kick in the pants to get moving on these.

2.  Dorothy Walpole - finish third row of pages.  Before is the first picture!

Pull Lust out and give her some love.  I haven't touched her since December.  Before: 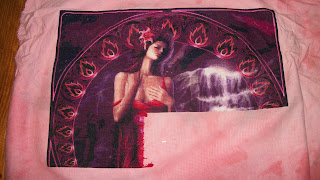 Posted by Sarah at 6:34 PM 2 comments: Links to this post