We've had a busy week! First we seem to have adopted a new kitty. Can't decide if we have a male or a female, there's so much fuzz! But we have an appointment with the vet today for shots so the question should be answered then. So, let me introduce PITA, otherwise known as Pain In The Ass. I suggested this name as a joke, but my husband likes it so I guess, Pita it is.

Last week, I had heard a kitty outside in the mornings and thought it was just the neighbor's cat. Wednesday night, a neighbor stopped us on the walk home from daycare and asked if we knew who this kitten belonged to, none of us did. But she (we're hoping!) followed Jakob into the garage. Ed, in all his infinite wisdom (haha) decided the best way to catch her was to let her into the house. The rest, as they say is history! 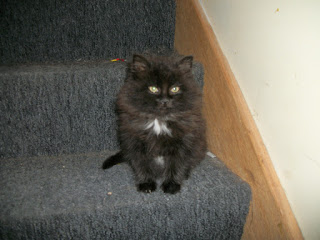 Last night, I worked on the ceilings in the bedrooms downstairs. Ed is off for the next couple of weeks and needed something to do. We purchased sheets of cedar last weekend so he will line the closets with it and install the closet systems before he starts going through boxes and boxes and boxes and boxes of "hunting stuff" that has been sitting in my basement since we moved back after the tornado. This is ceiling in Jakob's room. I did this just to see how it would turn out. Since it looked ok, I went ahead and did the rest of his room. 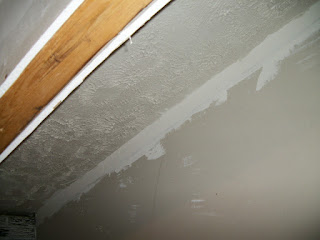 This is the closet in the guest room, where all the hunting clothes will, hopefully, soon live. 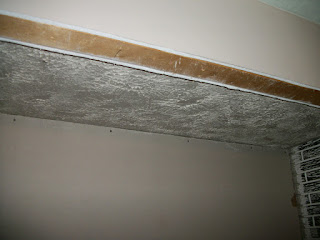 And Jakob's room. It is starting to look like a bedroom instead of an empty room in the basement. I'm hoping to be painting by the weekend. There's lots of drywall dust to be swept up and other cleaning to do first. Sunday night, I finished Paladin by Fire Wing Designs. Jakob was mad at me because he wanted to stitch these. I haven't told him that this one is for him for Christmas. I've started Warrior and am making pretty good progress. Even if I don't quite make Christmas, it will be done and framed by the end of the year 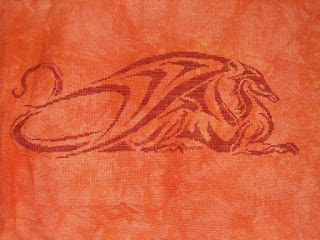 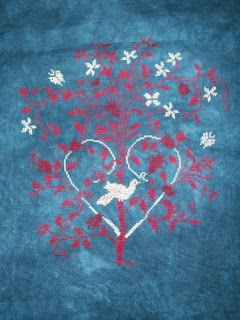 Now, to take care of my new start fix and to give the boys somethingspecial for Christmas I'm goint to attempt to stitch them both dragons. I haven't decided who gets what yet, but I've got Warrior and Paladin from Fire Wing Designs all ready to go.

I think I finally took care of the frogs, at least on Baumchen. It seems I can't count so I frogged the corners of this one. One more part and this one will probably be my final finish of 2010. But that probably won't happen till tomorrow. 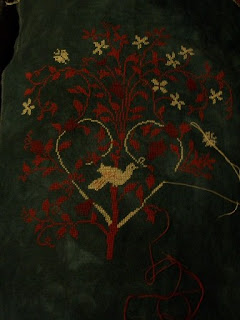 So, for now, I'm going to go figure out what we're having for supper tonight and go put 1900 Abecedaire back on the q-snaps. I have been pretty seriously considering another start...but since that start seems to be leaning towards Chatelaine's Convent Herbal Garden, I'm trying to resist. I want to finish 2 of the 4 Chatelaine WIPs before I start another one.

Dang! It's cold and snowy today and you'd think its the perfect day to stay in and stitch. I guess the frogs don't agree with the stitchy part of that statement though.

Off to finish frogging so I can attempt to get page 7 of Baumchen complete before I take the boys to supper!
Posted by Sarah at 4:32 PM No comments:

Yesterday, over lunch, I finished page two of the 1900 Abecedaire I'm stitching with the Sticklounge group. I have all the pages from the original release which are a little longer with one more alphabet, but I figure stitching it this way, with Sticklounge, may see this piece done sooner. It's gonna be huge!! 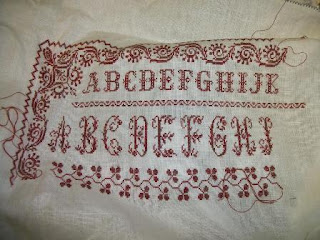