Thanks for the well wishes. I really appreciate them.

I need opinions. Tell me if you think I'm being too morbid or your take on this idea. I'm getting a copy of a photo of my grandparent together when they were much younger...not a gray hair to be seen. I want to get it enlarged to at least an 8x10. Here's the possibly morbid part, I want to get a picture of the headstone once it's completed and chart it. I want to stitch it and hang it with the picture. My husband gave me a dirty look. What do you think?
Posted by Sarah at 5:29 PM 1 comment: Links to this post

I thought I'd updated more recently. I haven't been getting much stitching done, too much going on and I've been reading a couple of books.

Tuesday morning I got a call from my sister, Grandma's blood pressure had dropped and she was running a temp. So I ran out there and spent the rest of the day and came home. Wednesday morning, I had to finish a couple things at work when I got a call from Dad that she'd passed. They were going to wait for the funeral home and follow them to make arrangements. I found out later Wednesday that the funeral's Saturday morning and I'm one of the pall bearers.

This morning, on my way to work, I'm driving along, minding my own business when I hit a deer. Not Bambi, I hit momma! Everything in my car lost power and I pulled off the road. I'm ok. The airbag didn't even deploy. It just sucks that everything seems to be happening this week. Three years ago on the 24th, our dogs got out and were hit on the same road, then this week has been one of the suckiest (is that even a word) week ever...knock on wood.
Posted by Sarah at 9:56 AM 3 comments: Links to this post

Here are some updated pics as promised. When Stars Collide is through part 8. I finished that part Friday while I was waiting for Jakob to get home from school so we could go up to the hospital. 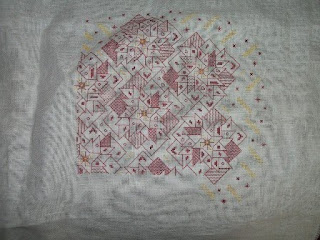 Then you have Baumchen. This is through part 2. I have started on part 3 which is the upper right corner and hope to have that part done today. I should have taken this to the hospital with me. I took Summer Knotgarden instead and got a little done on the third corner of part two but the football game was on and my sister was playing with the boys. They don't see her very often so it was worth watching! 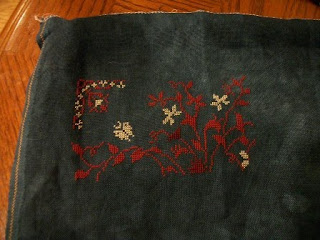 Then there's Lust. I'm still working on her arm and the colors are starting to look better. With just her forearm, I didn't like them at all! Once this page is finished, I'm hoping I like them a lot better! 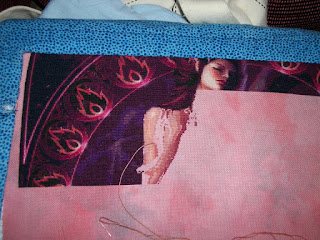 Thanks for looking and all the well wishes!

I'm going to get a post with some pics up later today. Right now the boys want breakfast!

We just spent Friday evening and Saturday in the hospital with Granny. She's now in hospice. Thursday night I talked to my folks to get an update and was told that there were more complications. Her leg had been hurting for a ocuple of days and when the hospital did an ultrasound, they found a major blood vessel was mostly or totally obstructed. That meant no surgery for the cancer. There was a family meeting Friday. I asked Mom what they were going to do. She asked me how much I wanted her put through.

We got to the hospital Friday about the time Granny was being moved to hospice. There is no course of treatment at this time. They're just keeping her comfortable with means morphine. She sleeps most of the time and when she does wake up, she doesn't know where she's at. She seems to recognize me when I was up close talking to her, otherwise, not so much. I'll probably be going back out sometime this week.
Posted by Sarah at 9:06 AM 1 comment: Links to this post

I know I need to post some update pictures but they may have to wait for a little while. I may be away from a computer for a couple of days.

My Granny has been in the hospital for about a week and a half. She went in because her red blood cell count was low and she was dehydrated. The dehydration was fixed with an IV but it look a little while longer to figure out what was causing the low red blood cell count. The docs have discovered she has colon cancer. She's decided to do surgery now rather than waiting. The surgeon can't get her in today so they'll probably remove part of her bowel tomorrow. This wouldn't be too bad for someone younger but she's 91 so any surgery is dangerous. The surgeon has kept her on clear fluids, so we're assuming he is planning on getting her in tomorrow.

Right now, I'm planning on taking my boys to see her tonight. Don't know if we'll hit actual vising hours or not, but Mom has worked in that hospital for almost 40 years so I think we'll be able to get in without too many obstacles.

Hopefully, since this is laproscopic surgery, there won't be any complications and she'll come out of it perfectly. But this isn't a perfect world and it doesn't hurt to be prepared so we can be pleasantly surprised!
Posted by Sarah at 8:44 AM 2 comments: Links to this post

Last night I finished another part of Zentangle. Here's part 17. I can't remember how many parts are in this one, but it looks like only two more parts to another happy dance!

Insteaf of continuing on with Summer Knotgarden this evening I pulled Lust out again and am making some progress. I'm stitching background on page 8 around her arm to see if that makes the colors in her arm look more realistic.
Posted by Sarah at 10:13 PM 1 comment: Links to this post

This last week has been interesting. My second, part time job has become a pain. The restaurant manager, Kim, quit in July. The new manager, Jennifer, is also the owner's daughter so I've been tip-toeing around a little, till I figure out what she's doing. Problem is, I don't think she knows what she's doing managing a restaurant. Long story short, I contacted the owner Friday and asked for a meeting. He met me and I showed him my list of problems and some of the other problems I found while cleaning out the office. He agreed that those were his concerns as well and he wanted to set up a meeting for today. I didn't have a problem as long as he was aware I would have my kids with me since Ed works today. No problem. Well, he was supposed to call me yesterday with a time for this meeting. I haven't heard from him. So, I'll work on getting some of my responsiblities taken care of and try calling him again.

I've been stitching on Summer Knotgarden and I've gotten through the second petal of part 2. This part is an interesting stitch. The varigated part of each petal is the same, but the green, the veins and the specialty stitches change. I'm so ready to be done with this part. I've about had enough of eyelets! This one is another piece from the Sticklounge group. It is available for 1 Euro at broderie.net. Sticklounge is calling it Baumchen which I think means little tree. The colors aren't actually this bright. I'm stitching it with two different perfect reds and Oil of Amber 4111, all out of detrious bags from HDF. I'm stitching on Mystic in 32 ct Belfast from Picture This Plus. 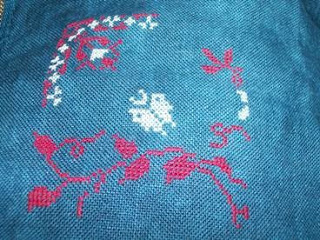 And last but not least When Stars Collide from Tam's Creations. This is through part 6 through the Sticklounge group. 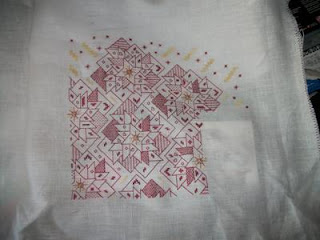 Now, I'm either going to go pull out Zentangle and work on the current part or go work on Jakob's room for a little while. I've borrowed a tool to make doing the corners easier. I had some big problems doing those last weekend. They're still time consuming but they look more finished now.

We were at Menards yesterday and looked at the sheets of cedar for closets. I decided that $25 was too much right now so I need to finish the closet too which meant mud and tape yesterday. Instead of spending $75 on cedar, we bought closet organizers for Jakob's room and for the guest room. I need to watch the ads so when baskets come on sale I can pick up a couple of those too so we can keep some of the smaller stuff coralled better.

We had a fairly busy weekend. Not the busy I had planned on, but busy just the same.

Friday afternoon, I was planning on having to grind deer, lots and lots of deer all day Saturday. It seems that Nebraska has a problem. We have too many deer. So to thin the herds a little, Game and Parks had an early season. All you had to do was purchase an inexpensive permit and you would be allowed to shoot all the antlerless deer you could find in your sights. So I told Ed to shoot 'em up! I have a case of sausage seasoning that's not doing anything in the basement. Well, it seems my husband is a dumb ass. Ask him, he'll tell you. He was supposed to go and scout the land where he was going hunting with a couple of friends. But it seems that they were supposed to meet at noon Friday to do this so they could get an evening hunt in. Did Ed remember this small but important fact? Nope.

So the friends got mad, eventually and went off without Ed. Could they call him? Nope. Maybe I should call them dumb asses too. So they're mad at Ed and Ed's mad at them. Oh well.

Instead, we went and watched flag football Saturday morning. Jakob played really well. I was very proud of him. Didn't get much done Saturday, but I did get a Sticklounge piece framed. Just a simple little frame, but I think it shows off the fabric and the color of the stitching. 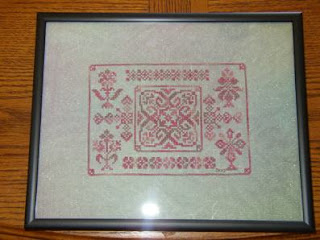 Yesterday I sanded the walls of Jakob's room. Then I came back upstairs for my little mud trough and saw someone parked in the drive way. Ed's dad was back but the sneaky man had made himself comfortable in the back yard with some beer and a paper while he waited for someone to come home. He said he'd opened the front door and called in but no one answered. Guess I had the music on a little loud while I was working. So...I finished putting another coat of mud on the wall and discovered that I must be getting better at this. The walls didn't look half bad! I'm hoping to sand and put the final coat on this week.

After I cleaned the mud off I went back to lacing Chatelaine's Autumn Watergarden onto foam core. Ed helped me hang it on the wall. I think it turned out really well. I tend to frame these very simply to better show off all the bling! 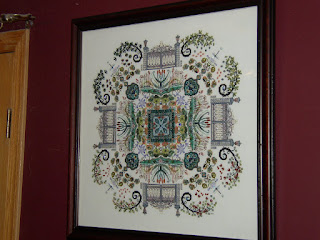 After I got every thing cleaned up after supper I stitched on Summer Knotgarden again for a little while till my book called too loudly to resist. Here's where I left off for the night. I really like the pop of color the pink flowers give. 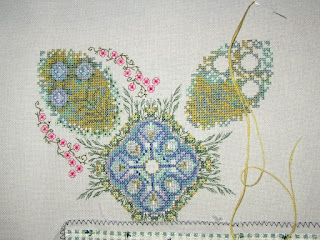 Posted by Sarah at 7:00 PM 3 comments: Links to this post