As of a couple hours ago Frosty Knotgarden is finished!!  Not only does this move it out of my WIP pile, it completes one of my projects from my 15 project challenge.  Only 14 more projects to go! 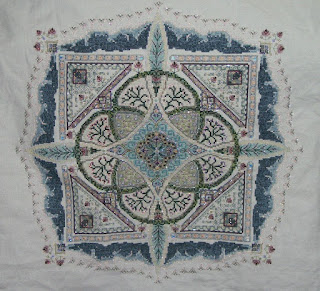 It took me about an hour to pick the next project out. I pulled out Petit Sampler and blah so I went back downstairs and dug around in the other WIPs and pulled out Spring Knotgarden.

Monday night we saw this little guy in our back yard.  Joshua called him a leaf hopper.  Up close he does look like a little leaf. 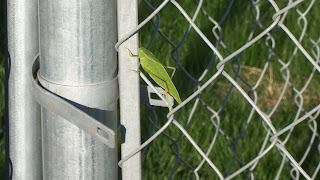 I've added most of the conversions I've done to my conversions page.  I'm only short a couple of the one's I've already kitted and I've been asked to do one for Caribbean.  That will probably be my project while I'm work tomorrow.  I've got to have something to keep me busy!
Andie asked if I'm planning on stitching the Big Mystery for 2012 and the answer to that is a resounding YES!  I signed up for that one just days after it was announced.
Posted by Sarah at 2:19 PM 6 comments: Links to this post

I just posted some more conversions on my conversions page.  They now include Summer Knotgarden, Persian Iris Garden, The Chinese Dragon and the Autumn Knotgarden.  More will probably follow later today, but I'm going to go back and finish beading Frosty Knotgarden so put on your dancing shoes!!
Posted by Sarah at 9:37 AM 2 comments: Links to this post

Wow!  For some reason I've been gaining followers.  Hi there!  I'm curious why you've decided to follow my blog.  Do you mind sharing.  If you don't want to, welcome anyway!

Andie asked if I would put all my Chat conversions on one page.  The ones I've posted are now there.  I just need to start digging through my Chat drawer (yes, they have their own drawer) and see what else is there that has been converted.  I know there's Hawaii, Persian Iris Garden, Pompei.  Convent Herbal Garden and Evening in the Park were kitted with the charted colors though.  Geez, I need to start stitching some of these up instead of getting the new ones.  The new Dragon Gate is also kitted and ready to go.  Maybe this weekend I'll get a couple more up.  Thanks Andie!
Posted by Sarah at 8:49 AM 6 comments: Links to this post

Just took Frosty Knotgarden off the q-snaps and took a quick picture before I put it back on to work on the upper right border. 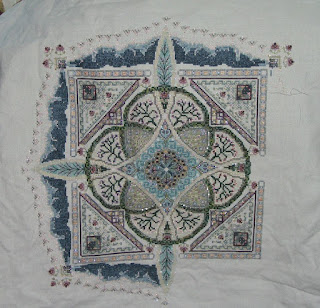 I would really like to see this one finished this year so I have some time to pick a frame so it can go to the county and state fairs next year.  If the entries are like they were this year, Frosty should be a slam dunk winner!
Posted by Sarah at 6:06 PM 6 comments: Links to this post

The end is in sight!

This shows part 8 of Purple Garden.  Part 9, the final part, will be released October 1. 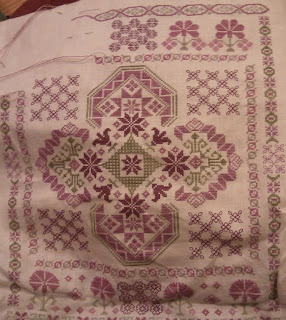 Next up is Frosty Knotgarden again.  It's getting close too, I just get burned out on the repeats so it takes way longer than it should.
Posted by Sarah at 9:08 AM 4 comments: Links to this post

Is finished.  I figured I would be able to finish part 9 last light.  There wasn't much to those little birds, but there were lots of colors!  Here's the overview.  It looks like more little birdies and leaves for each side for the remaining three months. 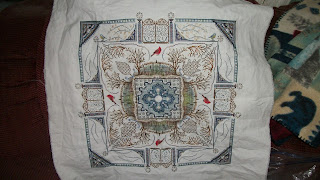 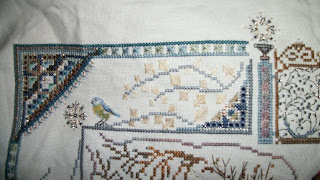 Next up, Purple Garden.
Posted by Sarah at 8:48 AM 3 comments: Links to this post

This isn't the best picture, but I finished the upper left corner of Winter Watergarden last night.  Hopefully, the upper right will be finished tonight. 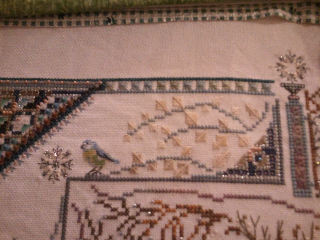 Ineke, my new WIP with the carrots is called Adriana B.  It's a new one I'm stitching with Sticklounge but you can also get it here.  Hopefully those little motifs don't look so much like carrots after the other side is done! lol
Posted by Sarah at 11:08 AM 3 comments: Links to this post

Since last weekend was a long weekend, we took the boys out to see my parents.  You'd think since they're only 100 miles away, we'd get there more often.  Doesn't seem to work out that way though.  First thing my dad shows me is a floor stand he's working on.  I sent him a link about two years ago of what I was interested in.  It was just a little bitty picture on the website.  But, he's been working on one.  He just can't decide how I'm going to be able to attach my fabric to the huge dowell he bought to go with it.

Sunday, we went to the Nebraska State Fair.  We hadn't gone since it moved to a more central location in the state last year.  Heck, we hadn't gone in years when it was in Lincoln.  These are my favorite handsome young men riding the ferris wheel for the first time.   They had a ball!  It's too bad that ticket prices are so high.  They could have ridden more rides!

We also walked through the Open Class exhibits.  I was terribly dissappointed by the entries.  I guess next year, I will have to get motivated and get some framing done so I can enter lots of stuff! 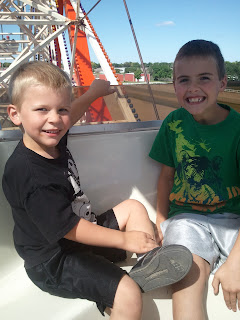 Here's the other ride they went on.  If you look closely, you can see Jakob's green shirt!  Josh is right beside him. 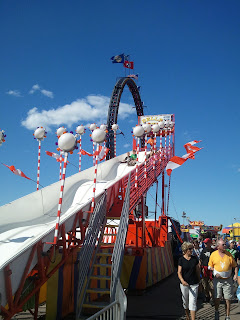 This project started out as a travel project.  There is no way I was going to be able to stitch over one on 28 ct fabric riding down the highway.  So I had this one all kitted up and ready to go.  When I checked my e-mail a little while ago, the announcement had shown up that part 2 is due to come out so it seems I'm just in  time. 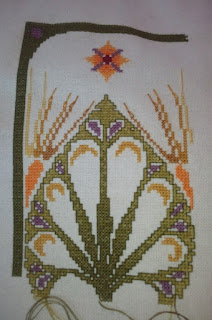 Since I finished this part, I pulled Winter Watergarden back out of the black hole all my WIPs reside in and finished beading part 8.  I've started one of the little birds on part 9 but haven't gotten very far yet.  For the most part part 9 is 2 little birds and a bunch of back stitched leaves.  Shouldn't take very long to stitch them up and move onto the next project.  That will probably be part 8 of Purple Garden.  That one just goes through part 9 so it is very close to being done.

I should probably go stitch!﻿
Posted by Sarah at 6:46 PM 2 comments: Links to this post 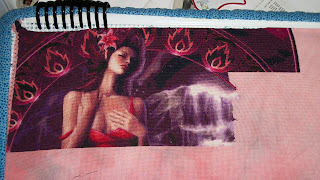 Joyce, I've got fabric cut for the Adriana piece and it is going to be my travel piece tomorrow.  I can stitch in the car but over one on 28 ct is just too small for me.  Lust is going with me too, but it is for stationary stitching!  I'm going to stick with Lust as long as I can since I would realllly love to see this row finished by the end of the year.  I'm really excited about getting to the dress!
Posted by Sarah at 11:57 PM 4 comments: Links to this post