The other day I looked and before this year, I hadn't really touched Earth Song since 2015.  Now, three more pages are done! 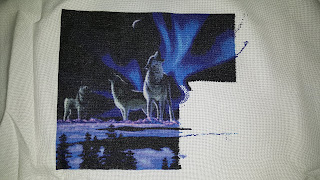 I pulled Earth Song off the QSnaps to take a picture last night and decided to pull out a couple of WIPs to try and make my goals for them this year.

My goal for Her Private Garden was just to add some stitches this year.  I added a length of 3371. 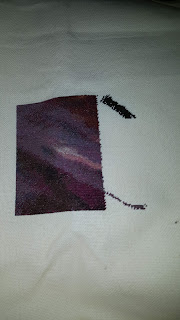 Then, I pulled out Hawaii and started working on the next pineapple.  This is as far as I got last night. 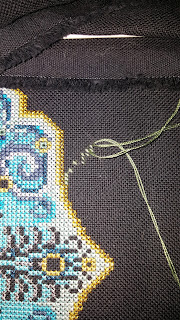 I'm planning to keep Hawaii out for the next week or so.  The pineapple don't take very long and finishing the remaining three, part 2, is my goal for this year.

Hawaii was left at home today and I brought Needleworker.  I still haven't added any more stitches, but I intend to over lunch at work today. 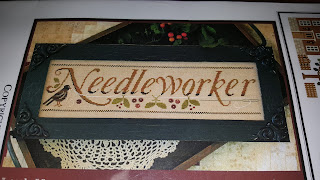 Earth Song made some good progress over the last week.  I actually added about 1300 stitches over the weekend which I haven't done for quite a while. 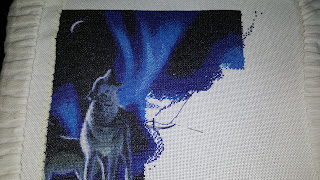 I'm hoping to see a page finish in the next week or so which is awesome since I hadn't made much progress on this one for the last couple of years.

I also had a very small new start on Needleworker by Little House Needleworks on the drive to my son's football game.  But since I decided I didn't like my 2x2 coverage and frogged the bit I'd done.  There was only a stitch or two which is not worth showing when we got to the game.
Posted by Sarah at 2:49 PM 1 comment:

M. Woods is at a stand still right now.  I'm debating on the color used for the H.  It's also used on the red flowers.  It's not really visible.  I'm debating just leaving it since it is a reproduction sampler, or above that top, green border, I've auditioned three different colors, one in two different weights.  It's just a couple of stitches in each one.  Tell me what you think. 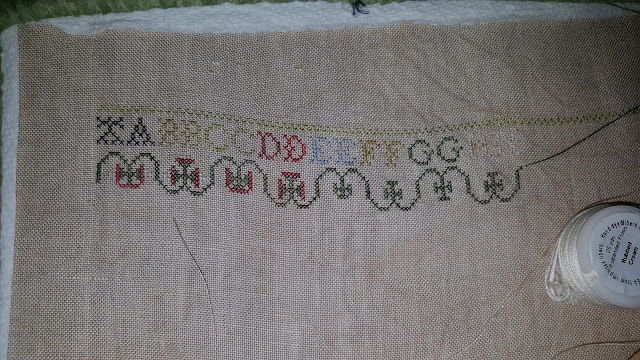 Earth got some love over the last week.  I'm almost to the half page point in the 939.  The rest of the center bit is pretty much all black then there is some more light blues on the right. 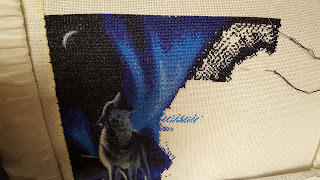 I've been struggling a little bit to pick a WIP and stick with it.  I don't know if it's because I decided I needed to touch all my WIPs before the end of the year, because I want to finish Earth Song next year or because I've finished kitting up Sarah Braizear and want to start her, or a combination of those.

Anyway, here's the progress I made on Chatelaine's Blue Moroccan Lace over the last couple of nights. 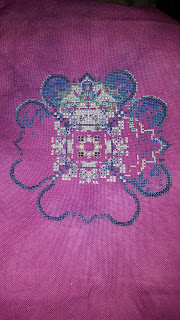 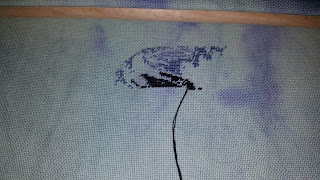 but I've miscounted in a couple places so there is frogging to be done.

I've made progress on Earth Song, but I think I spent more time looking at it over the last week than I did actually stitching on it.  So, it's taking a break.  I have made it to the edge of the page so progress has been made, I just can't stay focused on it. 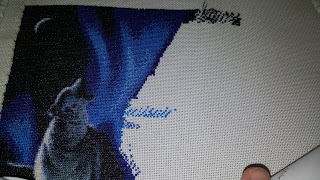 Yesterday, I pulled out M. Woods 1759 by Milady's Needle.  I've had this kitted with a custom HDF conversion since 2013.  I originally kitted it with three different shade of white in Kingston linen.  Since 46ct linen has hit my radar, I have a piece from xJuDesign that I decided to use.

Here's how far I got yesterday. 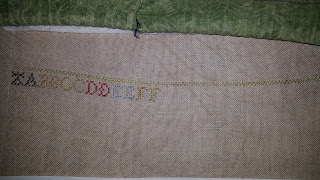