Looking outside into the dreary, raining blah that is the outside world right now, makes me glad to have a bright cheerful window to look at instead.  This is through page 7. 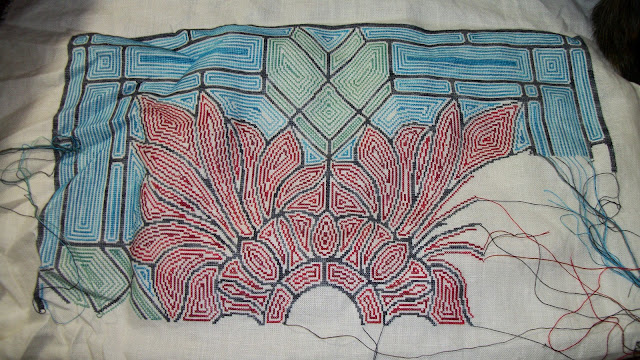 While I wait on page 8 and/or page 5 of Deep Blue Sea to be released, I 'm going to pull out 1900 ABC.  Something about stitching a monochrome can be so relaxing.
Posted by Sarah at 11:44 AM 3 comments:

Thanks for all the great comments!  They can really brighten a girl's day or make her smile after planting trees and potatoes :)

This afternoon, since I left work about 1:30pm since all I was doing anyway was surfing the internet, I came home and finished my letter S.  It's stitched with a custom Woad combo (2407/11/15) from HDF from early last year.  I seem to have a thing for the Woads and this came out great.  It even plays really well with the fabric that will line the box.  I'm thinking of staining the box in ebony.  Any thoughts?  Comments? 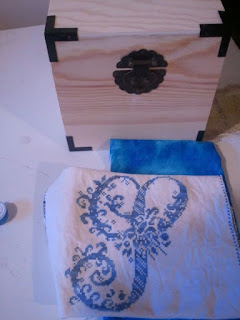 Now, I've got supper to get into boys so they can get into the shower so I can sit down with Window!

Well I didn't get as much hermitting done as I would have liked but there was some progress made.  I finished the entire right side of Spring Knotgarden.  Then I put it up for a bit. 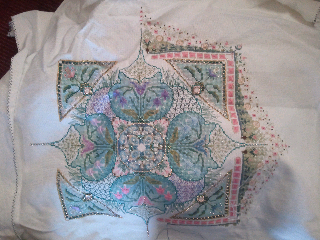 Friday night, I tea dyed a piece of Monaco.  You can't see it very well here, but it turned out very nice.  Very mottled.  It's for my box top for the box finishing class I decided to do something simple.  This will be the letter S.  I started the stitching yesterday morning and with any luck, I should be done stitching tonight. 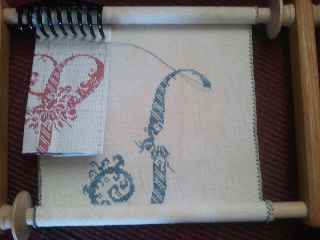 Spring Knotgarden and a box

I finished my first corner of Spring Knotgarden tonight.  The bright pink is one I subbed for the much more subdued one that started in part 1.  But I think I like it.  To me, spring is all about bright colors after the blah of winter. 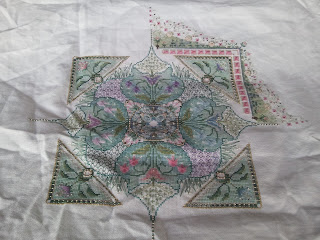 I'm also taking a box finishing class.  You start out with an unfinished box as seen here.  You end up with a finished box that is lined with fabric inside and has a piece of needlework mounted on top.

I found these boxes today at Hobby Lobby and picked a couple pieces of fabric while I was there.  I think I know what's going on top, I just need to get it stitched! 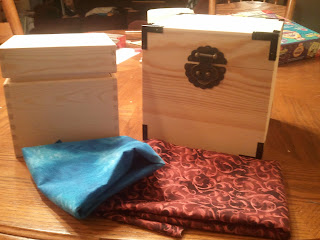 We had some excitement yesterday.  The weather man was putting the mid west in high threat severe weather all day yesterday and into the evening.  Thankfully, we didn't see anything worse than thunderstorms though lots of people did.  As far as I've heard today, no one was injured or killed.  All their "stuff" can be replaced.  Experience talking here folks.

After finishing part 4 of Deep Blue Sea, I pulled Spring Knotgarden back out.  The last time I worked on it, I have finished half of a corner of part 5.  It's not much, but it's progress.  Saturday, I finished the other half of that corner.  Leaving me with this 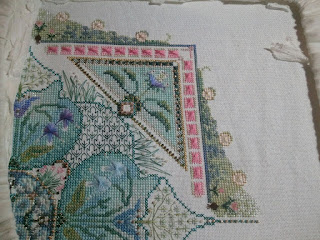 Then I pulled Chelsea's Gift out for a little while which turned into this afternoon before I put it down.  I'm making pretty good progress every time I work on it.  There is just a huge amount of confetti here. 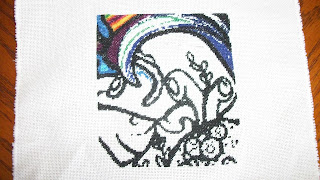 Then out came Lust.  I put in a couple of strands this afternoon, but I can't seem to get into her again.  I thought if I worked on a block of solid color, I would have an easier go but nothing.  I would like nothing more than to see another page stitched but I guess it's not going to happen...for now. 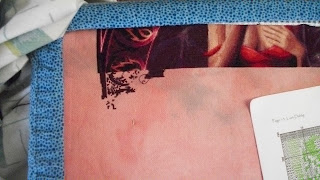 So, Spring Knotgarden is back and I'm working on part 6 of that same corner which is going well.  With any luck, I'll see part 6 for this corner done and I'll move onto the next corner this week.

I just added new conversions to my conversion page.

They include Serengeti, Spring Watergarden and Anniversary Sleeping Beauty Castle
Posted by Sarah at 3:45 PM No comments:

And then there were four. 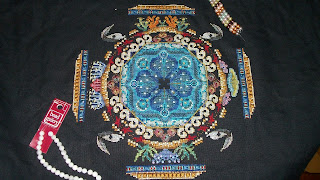 In the upper right corner and lower left corner are the beads I picked up last weekend for the oysters.  Right now I'm leaning towards the last bead in the string in the upper right.  They're kind of silvery and I like the look.  That could change between now and when they actually get attached though.

I just finished my first oyster on Deep Blue Sea.  I did sub the stitched black to DMC 413.  But even though I tried a couple of different colors for the back stitching I ended up keeping the black.  Now I just need to pick a shade of pearl.
What do you think? 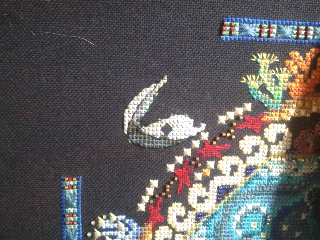 Hi guys!  I've been a busy stitcher in the last week.  After I finished page 9 of 1900 ABC, I pulled out page 4 of Coat of Arms sampler and I've finished that. 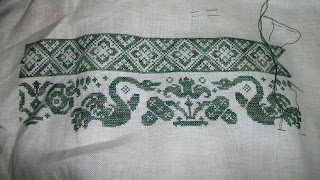 Then, I pulled Deep Blue Sea back out.  I don't know why I had problems getting started with part 3, but I just wasn't feeling it last month. 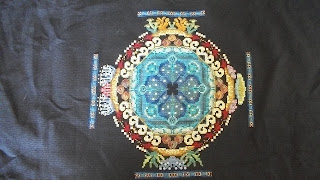 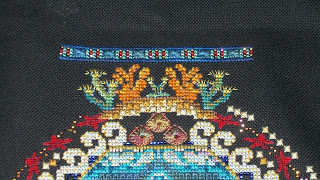 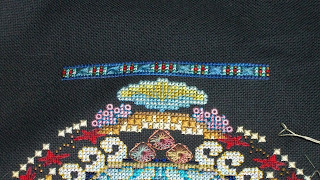 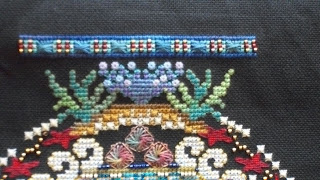 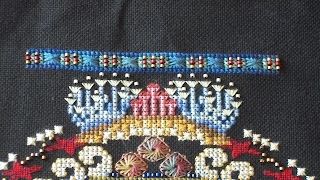 I don't know if it's spring time where you are, but spring has certainly arrived here.  We're about 4 weeks ahead of where we're supposed to be.  I took some pictures to show some of my spring time pretties.

Here's Lily of the Valley.  I think this is the first time in 8 years that it's actually bloomed. 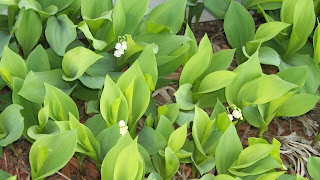 Columbine.  This stuff survived a tornado and has spread. 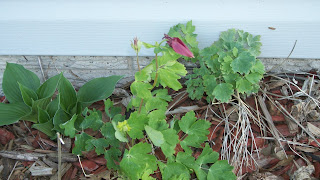 Pretty Tulips.  I didn't plant these, but this year I have 2 plants instead of just 1 I've had since 2000 when we bought the house. 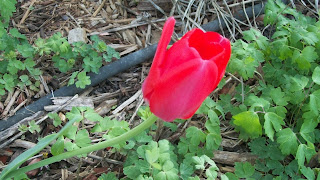 And my very favorites Lilac.  I bought 4 bushes at the end of the season in 2005 to screen the dog kennel.  They've grown up and filled in and right now smell absolutely wonderful.  These are hands down my favorite spring time flower. 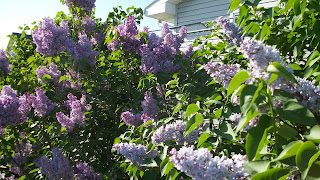 This year I've decided to plant a bed of lavendar.  DH isn't too enthuastic but since I've had all the utilities come out and spray where their lines are, he's willing to till up a big patch right behind the house.

Now, I've fixed my printer aka broke down and bought Dell ink, part 4 of Deep Blue Sea has been printed off and is ready to go.  Only problem is black DMC is really hard to see on black fabric.  There are oysters that have black in them and are backstitched in black.  I'm thinking of using some silver PTB instead.  I'll keep you posted on how that turns out!

Hey all!  Not much has been happening around here.  Temps have been really weird for the end of March and early April.  My crocus and Hyacinth are already done blooming.  My lilac has just started blooming and smells wonderful!  My tulips are about done and I just noticed today that my lily of the valley has little blossoms and my columbine is going to start blooming soon.

Yesterday, the we went to Earl May and Walmart on our annual quest for seeds.  I've decided I'm going to plant a huge bed of lavender right behind the house with a couple other kinds of flowers just because.  I'm also going to plant some stargazer lily bulbs in there too.  Those are the flowers I used in my wedding so are a little sentimental.  DH doesn't like them so much though.  They really bother his allergies!

Tonight I finished page 9 of 1900 ABC.  I could have pulled out page 10, but I decided to finish page 4 of the Coat of Arms sampler first. 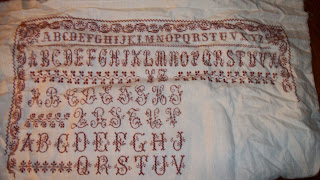 I tried to print off some of the new Chatelaine pages today, but my printer doesn't like my color ink cartridge.  I got several pages out of it then it mysteriously became an unsupported cartridge.  I've sent an e-mail to the store I got it from..

Do you guys buy brand new ink cartridges from the manufacturer or do you buy refilled and reconditioned cartridges like I tend to do?  Where do you get yours from?