Last weekend I finally framed this little cutie for Joshua.  I stitched one of these dragons for both boys for Christmas and Jakob's has been sitting around because the glass was broken when I opened the package.  I just had to get a replacement piece of glass, pull the old one out and pop everything back in.  Then, in the interests of keeping everything fair, I framed Josh's too.  I think he's a little cutie! 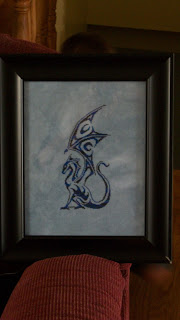 Since I finished part 5 of Winter Watergarden, I started on part 2 of Spring Knotgarden.  This is as far as I got before I started hearing the call of another piece.  It's ok though.  This one doesn't have another part come out till July 1.  This way I don't get really bored with all four repeats this month.

I've also changed my mind on a couple of the colors I orginally converted some of the silks to.  SNC 181 Golden Pines turned out to be really close to Befrogged.  I had a little of the SNC from a previous project and was very happy with the conversion.  Most of my conversions are done from pictures on my computer screen, but it's kind of nice to have the colors in hand.  Anyway, the Befrogged is the main leaf color for this part.  The other color is the stems.  This one started out as HDF Amber Waves and you can see it in the stems and leaves around the outside of the center pond in part one.  I really didn't like this color for the stems in part 2.  I came back with a custom color from the mini forums at HDF called Cactus.  It's got some nice varigation and seems to work much better with the colors of the flowers.  I'm still debating whether to frog the stems in part one or just leave them be. 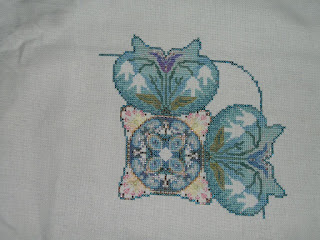 This is what was calling.  One Nation by Bygone Stitches.  I'm slowly making progress! 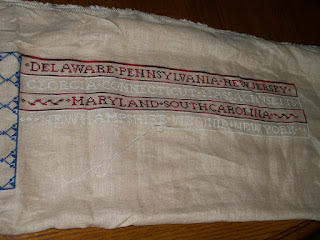 Today, I pulled some silk to do a floss toss for Lizzie Kate's One Hundred Years.  It looks like a quick stitch.  I have none of the called for colors but went with similiar HDF colors instead.  I was drawn to the Be series of colors for this one.  My conversion is
Crescent Colors/HDF
Caterpillar/Beseeded
Cocoa Bean/Bemoiled
Ye Olde gold/Bewooded 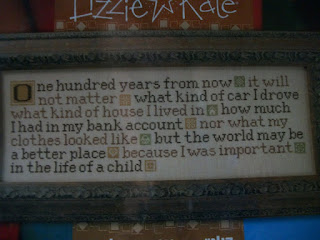 And here's my floss toss.  The fabric is what was left after I cut a piece for another project.  Don't remember what color it was right now though.  Butter cream, maybe? 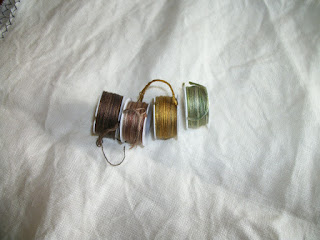 ﻿Now, while my little boys are at a neighbor's house playing and the bigger variety is at a friend's house, I'm going to pull One Nation back out and see how far I can get tonight...while I think about what to make for supper.  I'm sure they'll all come home hungry!

I love the sentiment you've chosen to stitch. That's just lovely. Good luck with one nation. I've seen it before, and it's lovely. Keep up the good work and you'll have it finished before you know it.